Yes, you read that right. This Democratic National Chair thinks all Masculinity becomes toxic. So much for the self-proclaimed party of the tolerant. The Democrats have declared war on men! Here is his gameplan to fight the war as reported in Quartz in DNC chair Tom Perez suggests toxic masculinity is not a partisan issue

Do not let the headline fool you, the democratic party under Obama tried to redefine sex according to a Texas judge when he found Obama’s Transgender bathroom policy Unconstitutional. The real crime is Obama tried to withhold Federal Funds from schools districts who had the nerve to disagree with his decree.

“In an Aug. 12 hearing in Fort Worth, lawyers for Texas told O’Connor that an injunction was necessary to thwart the Obama administration’s attempt to override the will of local school districts by imposing its definition of “gender identity” on all public schools.

“Schools are facing the potential loss of funding for simply exercising the authority to implement the policies that best protect their students, ” Paxton told O’Connor in a brief. “Every employer is now being threatened for not bowing to anyone that identifies as the opposite sex.” from The Statesman in: U.S. judge blocks transgender rules for schools

Now back to Tom here are some quotes, beliefs and what he has fought for.

6. What is your biggest anxiety about being a man?

“I think every man, no matter how strongly he claims to be a feminist, has moments where his masculinity becomes toxic. That’s one of the side effects of living in a society beset by systemic sexism and gender inequality. And that’s why it’s important to be aware of one’s bias”

He believes that every man is bias and toxic!

3. What do you do on a daily basis to advance gender equality?

What war on women and their right?  What this so-called American politician does not understand is sex does not give us our rights, being born American does. First off, women are not a minority in the world they are the majority. That is a lie. Just voting for a candidate because they are a woman is emotional, not logical. We as Americans should want the best candidate for the job regardless of sex. To just vote for a woman because of her sex would be by definition sexist. The knife cuts both ways unless we use liberal logic.

We have written about this constant pattern to paint anyone that is against illegal aliens and abortion are automatically to the Democrats a White Supremacist. I would like to ask what if a black American woman was against abortion, but liberals do not think things out very well. This belief has been in our government for years and here is proof from an official government report in 2009 and they were following Janet Reno’s policy. Read it for yourself. Official Report Shows If You Are Anti-Abortion or Illegal Immigration You Are A White Supremacist So Says The Obama Administration!!

This is why they are making up so many new words or genders. It is a great label war. If you do not agree you are a bigot or nazi.

Here are somethings Tom Perez fought for in his career.

In 2009, the Civil Rights Division under Perez’s tenure filed suit against a Herkimer County, New York school for “alleged violations of the Equal Protection Clause of the Fourteenth Amendment to the United States Constitution and Title IX of the Education Amendments of 1972″.[79] The plaintiff, a 14-year-old high school student from Mohawk, New York, who “dyes his hair, and wears make-up and nail polish”,[80] was reportedly subjected to verbal sex-based harassment and was “threatened, intimidated, and physically assaulted based on his non-masculine expression”.[80]

In J.L. v Mohawk Central School District, the settlement required the school district to begin “training staff in appropriate ways to address harassment”, to “review its policies and procedures governing harassment” and “report to the New York Civil Liberties Union (which previously represented the student in the lawsuit), as well as the Department of Justice, on these efforts as well as its ongoing response”.[81] This was the first time since the Clinton administration that Title IX was applied to gender identity discrimination. 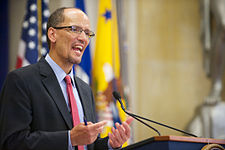 After the shooting death of Florida teenager Trayvon Martin, by George Zimmerman in Sanford, Florida, in 2012, Perez was brought in by Representative Alcee Hastings and Sanford Mayor Jeff Triplet to investigate the police department’s handling of the case.[90] A full-scale investigation was later launched by the Civil Rights Division, where Perez led an inquiry on the shooting investigation. After a thorough investigation was promised by Attorney General Eric Holder, Perez went to Florida, meeting with U.S. Attorney Robert O’Neil, family members of Trayvon Martin, and local officials to investigate whether the shooting was a racially motivated hate crime.[91] The Justice Department launched a probe into Sanford police chief Bill Lee, who was fired two months after the beginning of the investigation

In June 2008, the Civil Rights Division opened an investigation into the Maricopa County Sheriff’s Office (MCSO) and Sheriff Joe Arpaio, following allegations that the MCSO was engaged in a pattern of practice of unlawful conduct.

The Obama administration directed Perez and the Civil Rights Division in challenging South Carolina‘s 2011 voter ID law, over concerns that the law violated Section 5 of the Voting Rights Act of 1965.[105] Perez successfully blocked the law from taking effect, after the Justice Department alleged that South Carolina had failed to prove that the law would not have a disproportionate effect on minority voters.[106] In a letter to South Carolina’s Deputy Assistant Attorney General, C. Havird Jones, Jr.,[107] Perez questioned whether 81,000 registered voters, all of whom were minorities who didn’t have government-issued or military photo identification, would be able to exercise their right to vote, citing “significant racial disparities in the proposed photo identification requirement”.[107]

Perez also oversaw the Obama administration’s efforts in challenging a 2011 voter ID law signed by Texas Governor Rick Perry, the second voter ID law consequently found to have violated Section 5 of the Voting Rights Act.[108] Addressing the Supreme Court case Crawford v. Marion County Election Board, where the court upheld the constitutionality of Indiana‘s photo ID requirement, Perez argued that “[Texas’s] submission did not include evidence of significant in-person voter impersonation not already addressed by the state’s existing laws”.[109] Perez also stressed data from the Texas Department of Public Safety that found that registered Hispanic voters were 46.5% to 120% less likely than non-Hispanic voters to have a government issued driver’s license or state required photo ID.

On May 14, 2010, Perez testified to the U.S. Commission on Civil Rights that political leadership was not involved in the decision to dismiss three of the four defendants in the NBPPcase. However, on March 12, 2013, the Department of Justice Inspector General released a report stating that Perez’s testimony did not reflect the entire story, as AAG Perelli and DAAG Sam Hirsch were involved in consultations on the case. However, the Inspector General found that Perez did not know about these consultations at the time of his testimony, and therefore he did not intentionally mislead the commission. However, because of his role as a Department witness, the Inspector General believed that Perez should have inquired further on this issue before testifying.[113]

In the same report, the Inspector General found that the Civil Rights department exhibited a clear priority in enforcing the motor-voter provisions of the NVRA over the list-maintenance provisions. However, the Inspector General did not find sufficient evidence to conclude that these differences in enforcement were for political reasons.[113] In particular, they found that Perez sent letters about list-maintenance enforcement in December 2010, so as not to be viewed as interfering with the 2010 elections.[113] However, this letter provided no guidance on how states were to enforce list-maintenance procedures, instead leaving it up to the states.[114] Overall, the report stated that: “The conduct that we discovered and document in this report reflects a disappointing lack of professionalism by some Department employees over an extended period of time, during two administrations, and across various facets of the Voting Section’s operations.”

Yes, Black Panthers with batons in their hands calling whites voters that entered “crackers” is not racist or intimidation in this Champion of “civil rights’ book. It is amazing at the hypocrisy of liberals.

America needs to wake up to the threats against freedom that the Democratic party is pushing. They invent new “rights” while oppressing your Constitutional Rights. The Democratic Party has a war on men led by weak men and women!~RJH